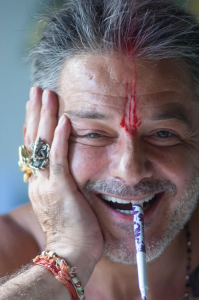 His “LostDog” is a trademark, his yellow a color of hope. Aurèle Ricard is the prototype of a generation of artists without any complexes or moods, driven by on-the-ground action more than by a simple arty attitude, a way of being more that a way of showing. The artist Aurèle can be recognized by a certain power of assertion. If one word could undoubtedly define his relationship to the world, a word which animates both his work and his life, that would be: ACTION. Aurèle’s collected works take on the appearance of a fight: a fight for Art as much as a fight for Life. Enraged and committed artist, Aurèle comprehensive work conveys a message of urgency and resistance to the plague of an era of which his “LostDog” becomes the symbol. Aurèle has been developing, for more than twenty-five years, the same radical project of denouncing modern wanderings. Its goal: to mobilize present and future generations in the face of wars, epidemics, ecological catastrophes, political and media excesses, precariousness and exclusion, inequalities and overconsumption. In Aurèle’s world, art confronts reality and thereby becomes a true “mirror of modernity”.

Meet the artist behind Lost in Singapore, to share a more in depth view of his inspirations and message behind “LostDog”.

Free event – Registration below is mandatory.
In Alliance Française’s theatre, the artist will be on Zoom.