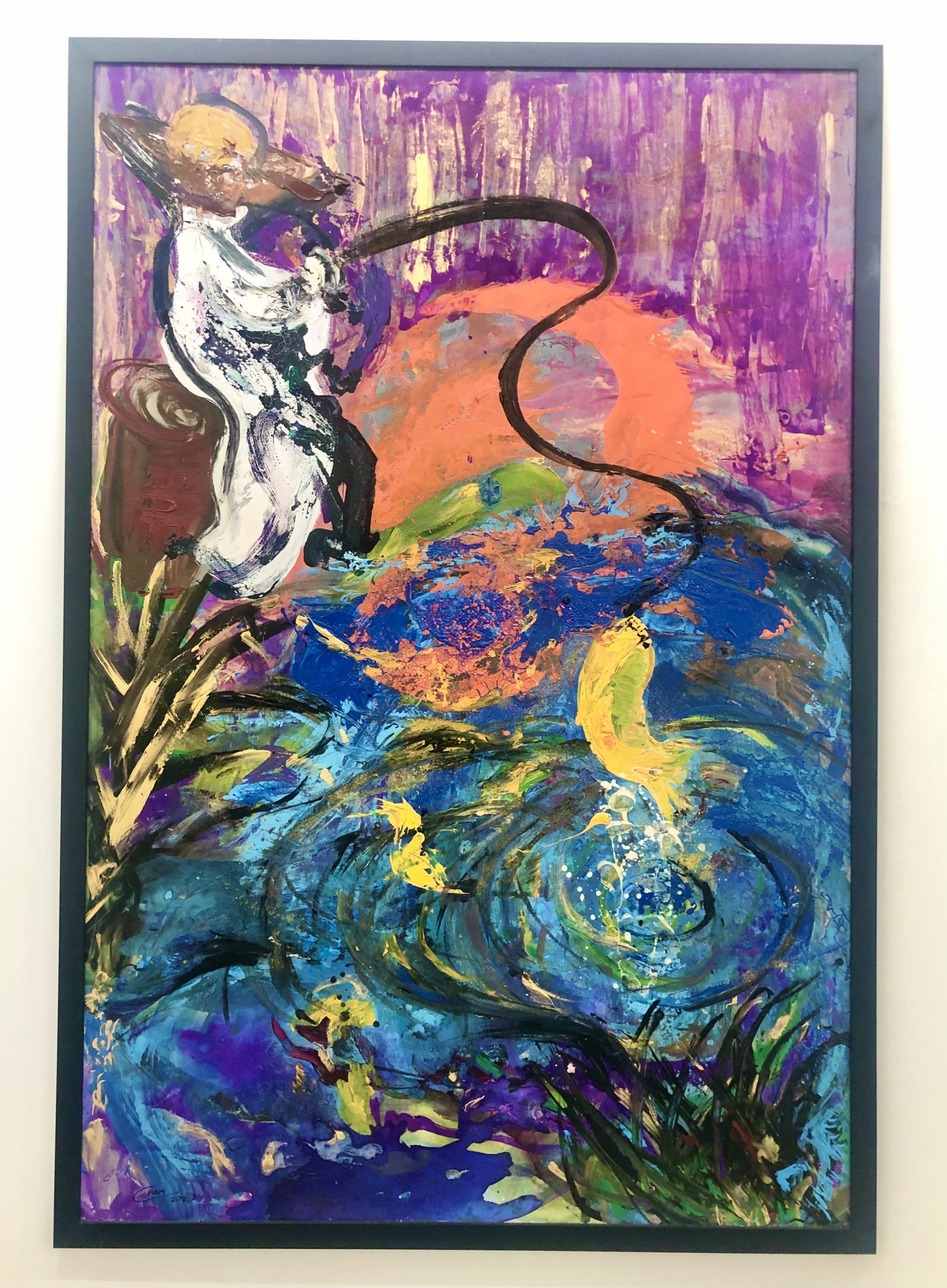 The Old Man and The River

Yi Quan researches extensively on eastern and western philosophies, from the Vedanta to the Tao De Jing, from the existentialist writings of Kierkegaard to the Zen-Buddhist canon. His art-making process is informed by surrealist visions, the domain of hallucinations as well as automatic qualities embedded within forms, and mysticism, which he feels allows him to attain a degree of creative expression that is rooted in his deep, personal explorations into meditative practices, yoga, and aesthetic forms gleaned from nature. It’s evident in this work, The Old Man and the River. The painting seems to capture the moment where the old man has caught a fish. This can be seen in the energetic flex of the rod and the pose of the man. The rod with the black line is done with one swift stroke, giving great emphasis on the spring of the string and the leap of the bright yellow fish. While the free and spontaneous style of the painting is done like those in Chinese ink paintings, he has given the work a contemporary spin through his use of vibrant colours and a series of textured surfaces. Perhaps this work underscores the elusive nature of the Tao; in traditional lore, this was Jiang Ziya of the Zhou dynasty. In narratives that live on till today, a sage waits patiently for the archetypal prince. However, there is neither sage nor prince in the spirit of the cosmos, only the omnipresent Tao.

Chen Yi Quan (b. 1982, Singapore) is a self-taught painter. Yi Quan obtained a degree in psychology from the National University of Singapore and is of Teochew-Hakka descent. His interest in painting was first piqued by the Nanyang style painters; the Balinese Barong, by Singaporean artist, Cheong Soo Pieng. This led to a further exploration of the works of European painters such as Gauguin, Cezanne, and Chagall, as well as the cubist tradition. Well situated in an environment that represents a meeting point between China and Western thought, in terms of language and culture in general, he began a careful study of the classical Chinese painters through to the modern masters. This eye on the hybridisation of forms, pluralism, and the pursuit of relatability with the viewer ultimately showed up in the use of Chinese ink, perhaps functioning as a conduit for his questions on ethnicity, identity, and aesthetics in post-Lee Kuan Yew Singapore.