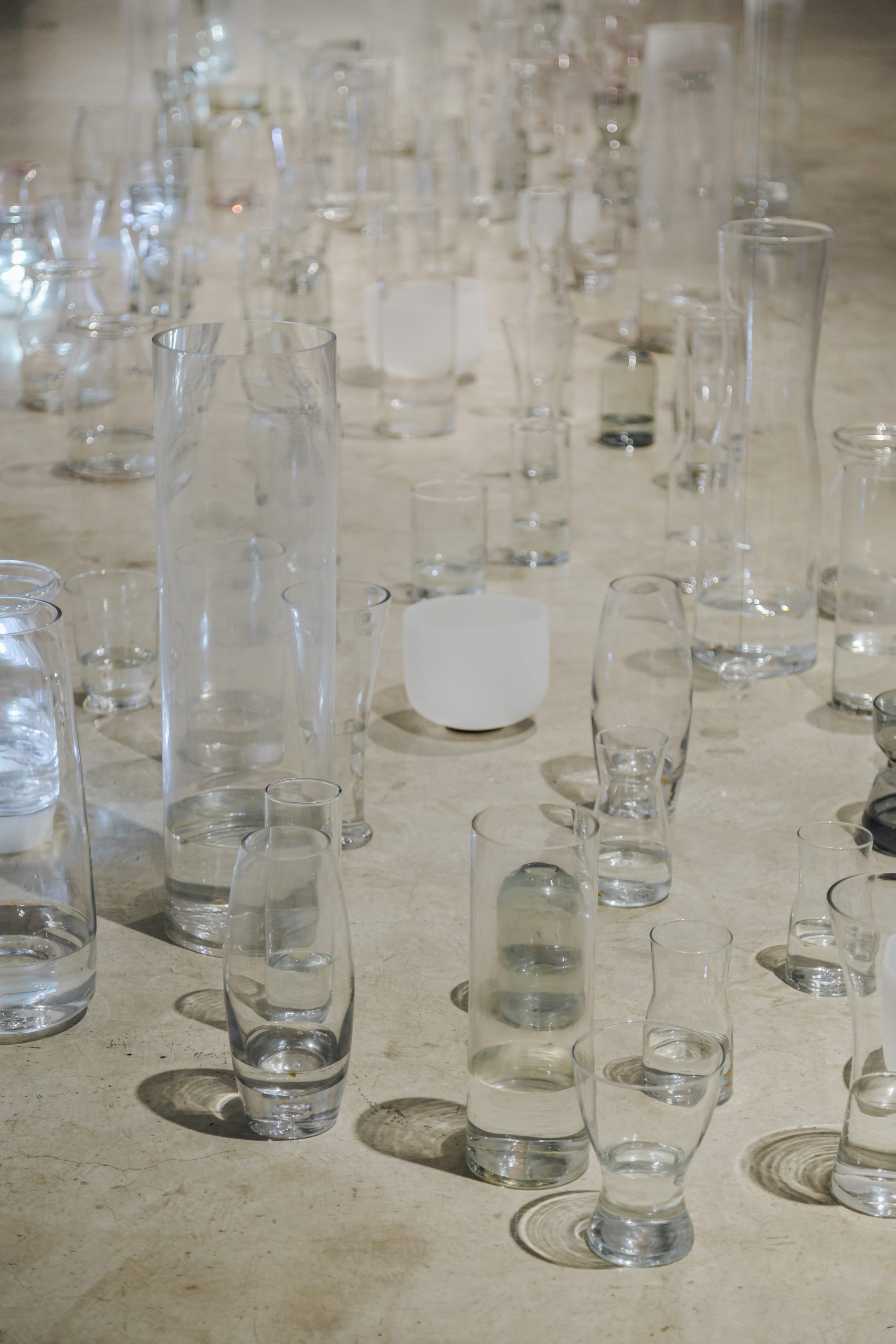 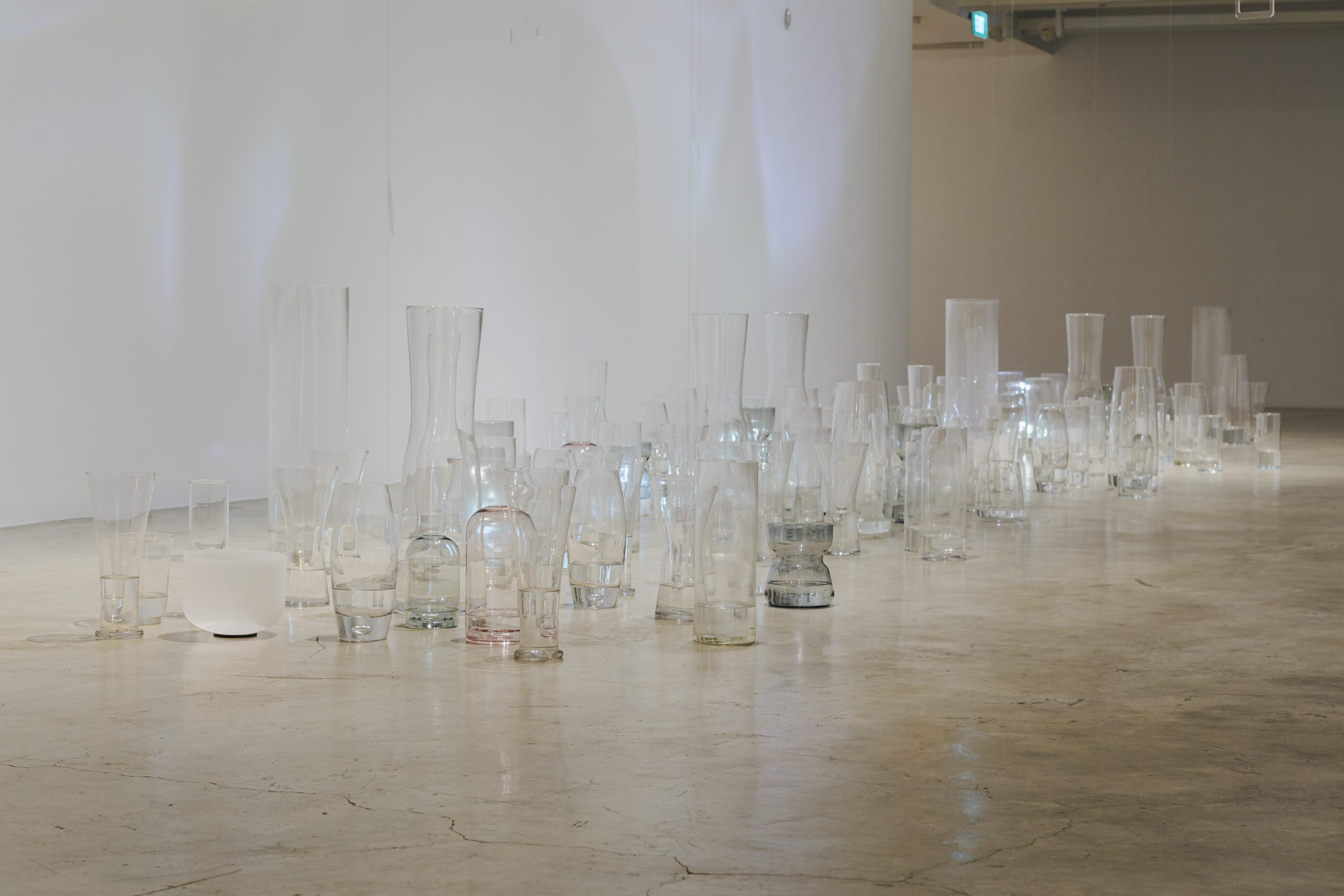 Strike (2021) is a crystalline landscape of water-filled glass containers; archipelagic groupings open up and encourage a stroll between these water islands. Light reflections create ripple effects on the walls and let the fluid element appear as a visual that engulfs. But again here, water is not simply a visual component. It is also sound. The audience discover that while walking through the water archipelago, strings hanging from the ceiling are distributed all over the place. The handles attached to the strings indicate that pulling might be required and when pulled, the work reveals its other dimension — sound. The installation shifts from a purely visual experience to an acoustic one. The audience is simultaneously immersed in the sound of a glass-water Glockenspiel and is the activator and conductor of the work. Furthermore, this installation becomes a stage in which the audience themselves are on display – interfering, inter-acting.

In this way, the work strongly connects to a longer-standing tradition of water works in the arts that has emerged since the mid-20th century. An echo chamber with strong historical ties as it resonates with the works of John Cage (Double Music in collaboration with Lou Harrison, 1941 & Water Music, 1952), Hugh Le Caine (Dripsody, 1955) or Tôru Takemitsu (Water Music, 1960). Specifically, in the idea of water as an unpredictable force, a strong connection between the work of Victor and these historical references can be seen. As Douglas Kahn had highlighted in his writing on Cage’s use of water in his works: “Water produced a variability within percussion that, as Cage understood in retrospect, was already characterised by variability. Thus, an inability to control pitch was added to the already noisy status of percussion. Most important, water produced the most marked instance of the variability that ‘prepared me for the renunciation of intention and the use
of chance operations.’”The same can be said about Strike. Even though it is not water itself that creates the loss of control, the work includes this component through an unpredictable interplay with the audience. And with this, no matter how often one experiences the work, it is always a unique event.

Suzann Victor is a prolific Singaporean artist whose practice spans over 20 years, from an award-winning abstract painter in the 1980s to being Singapore’s first female representative at the 49th Venice Biennale.

At STPI, Suzann Victor responded to and inverted traditional printmaking in experimental ways, creating new methods of performing materiality and ideas that resonate long after the aesthetic encounter. These innovative strategies resulted in architecturally-presented paintings with paper pulp, whilst her gestural acid paintings were the largest copperplate etchings ever produced at STPI in 2015. Her reconstruction of the postcolonial cultural/ family unit were fronted by Fresnel lenses whose perceptual effects confounded the act of seeing, all of which are unusual additions to her practice consisting theatrical devices, kinetic mechanisms, performance-installations, experimentations with the body, light, water and natural phenomena such as the meteorological where she induced double rainbows to appear inside the National Museum of Singapore.

Victor’s works have graced international platforms such as the 6th Havana Biennale, 2nd Asia-Pacific Triennial (Queensland Art Gallery), Adelaide Biennale (2008), Sunshower
Exhibition, Tokyo and the 5th Seoul International Media Art Biennale, Korea. She was a recipient of the 2009 Civitella Ranieri Foundation Fellowship and a special residency from the Fukuoka Asian Art Museum in 2017. In 2019, her iconic performance, Still Waters, was honoured as the theme of the international theatre showcase M1 Singapore Fringe Festival.