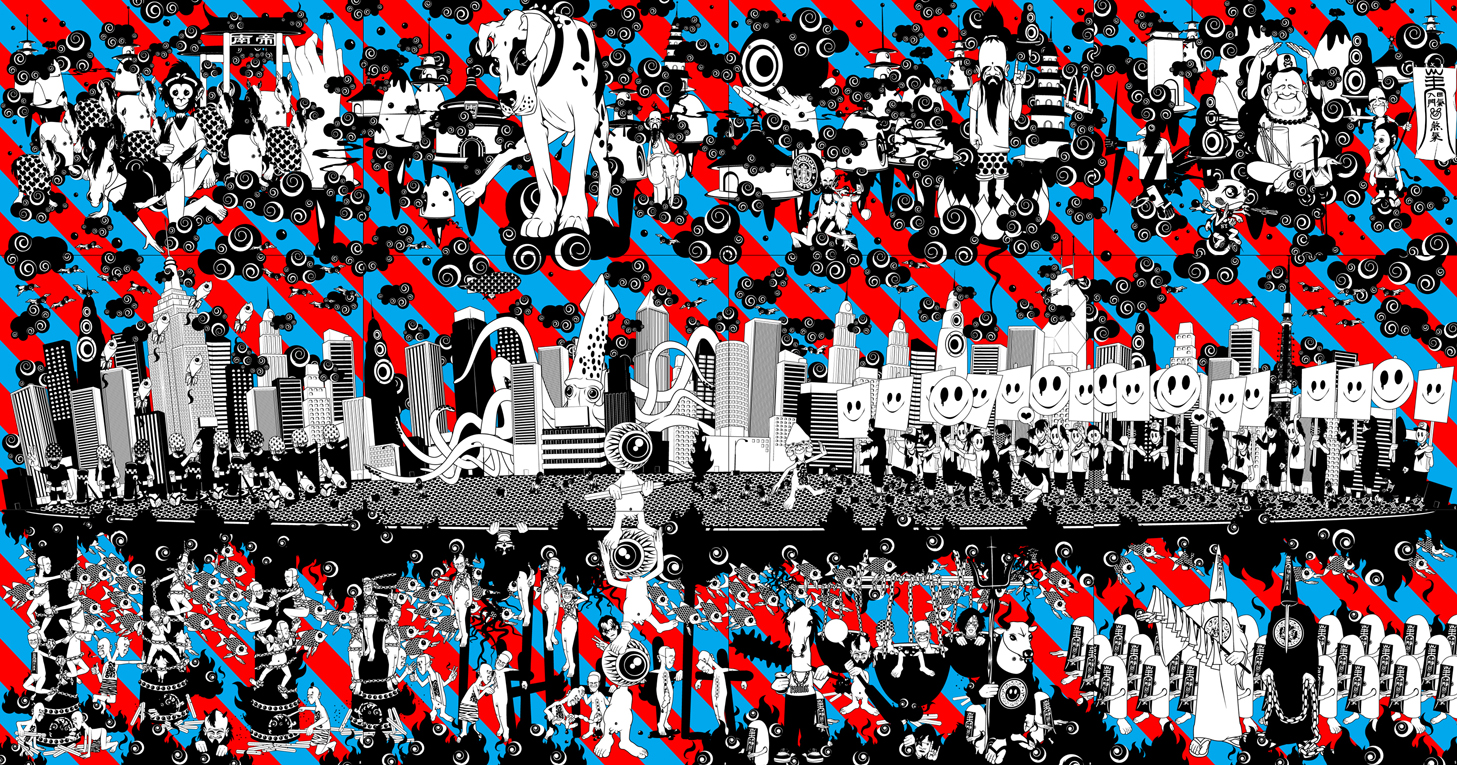 In Control Chaos, PHUNK has portrayed a new world, inspired by their childhood memories, Chinese mythology and memorable landmarks like Haw Par Villa. Control Chaos depicted heaven, earth and hell, and reflections and imaginations of their environments at the time of its creation. Each character in this new world has its own sets of orders and lives according to those truths it values.  However, then the distinct universes of the characters are put together, the result is a symptomatic chaos – like the title, it is a “CONTROL CHAOS”.  Beyond the humorous icons and contradictions, PHUNK suggests a glimpse of postmodern identity – singular and universal.  In that, the characters maintain their individual identity/universe without being classified or categorized, and yet, they also coexist inside the boundaryless chaos. This chaos, in the post-mechanical age, might be new vision of fluid utopia. The meaning and relevance of Control Chaos reflected the world environment at the time of its’ creation – post the 11 September 2001 attacks, and continues its relevance and significance to our current world of Brexit, Trump and The Umbrella Movement. This seminar work is the central theme of PHUNK’s 25th anniversary celebrations.

PHUNK is an internationally acclaimed, Singapore based contemporary art & design collective . Founded in 1994 by Alvin Tan (b. 1974), Melvin Chee (b. 1974), Jackson Tan (b. 1974) and William Chan (b. 1973), they developed a novel approach to collective art-making based on the collaborative aesthetic of a rock-and-roll band and informed by a shared interest in urban subcultures. Described as "The Champion of Singapore's Graphic Scene" (Creative Review, UK), "Asia's hottest agency" (Computer Arts, UK), "one of the world's foremost cutting-edge design collectives" (Asia Tatler, Hong Kong) and "iconic representatives of the new wave of young Asian creators" (Get it Louder, China).
They have propagated a visual signature that seamlessly blends and reinterprets their diverse influences such as traditional Chinese craft, philosophy and folklore, Hong Kong wuxia pulp fiction, Japanese manga and otaku subculture, Western popular culture, art and design movements into a singular creative thought that reflects their multi-cultural identity, background and environment. Labeled "Creators of modern urban mythological tales" (Chinese Contemporary Art News, Taiwan), PHUNK has created a visual universe densely populated by ancient gods and modern creatures, to depict universal tales  social satire, humanity morality, rock n' roll ethos, contemporary culture and PHUNK's unique witty sense of humor. The concept of 'universality' in the age of modern globalization is a constant theme in their works.
They constantly challenge the conventional notion and definition of the 'artist' and 'commercial design studio' by constantly blurring the boundaries between both, mixing Neo Pop Art ideology with Post-Modernist  design sensibilities. Their cross-disciplinary approach is best described as "an aesthetic collective consciousness" focused on experimenting with new approaches to visual expressions. Their expansive scope of projects spans across art, design, publishing, fashion, music, film and interactive.
PHUNK has collaborated and worked with international brands and artists such as Nike, Nokia, MTV, Daimler Chrysler, Herman Miller, Uniqlo, Levi's and The Rolling Stones. Their works are featured in many international publications and awarded in various design award shows. One of their artworks titled 'Electricity' was cited in the book, 'Graphic Design, A New History' as "Instances of truly global graphic design". They were awarded 'Designer of the Year' in 2007 by the President's Design Award, the highest accolade for designers in Singapore. PHUNK have exhibited and lectured extensively around the world.