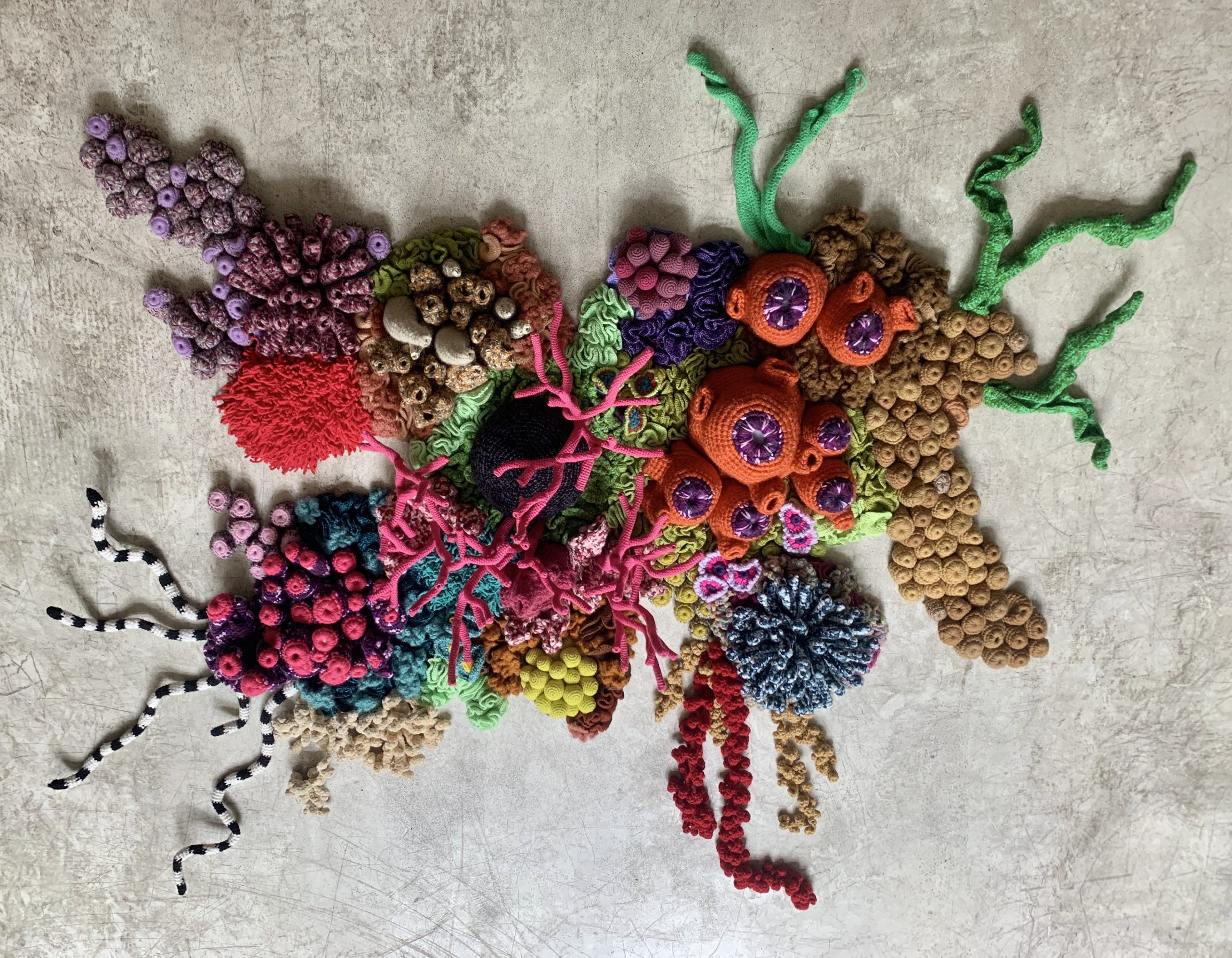 Mulyana experiences the act of knitting and crocheting as a form of silent meditation and prayer. In Coral Island Harmony #5, small clusters of unique , vividly coloured corals are held together tightly by an invisible, unseen force, forming into an exuberant, diverse ocean ecosystem that recalls a thriving marine seascape, and plays with the idea of a close-knit community. Modular in nature, the artwork serves as an important reminder that together, we are all capable of creating boundless beauty and harmony. The coral island is also home to the Mogus, an octopus-like creature that is the alter ego of the artist.

Jogja-based Mulyana was educated as an art teacher and learned knitting and crocheting at the famous book shop collective Tobucil in Bandung. Mulyana experiences the act of knitting or crocheting as a form of meditation and prayer. His pieces begin their lives like small organisms, the modules slowly blooming with quiet contemplation into vividly colored clusters of queer forms that seem to hold together tightly, as if a pulling force was binding them relentlessly with invisible strength. These islands were aptly titled, Sister island, Coral island and such, ironically prompting us to recall coral life on the seabed, instead of man-dominant or artificially reclaimed islands. As you draw closer to peer into the multitude of tiny eyes poking out of the coral-like forms, cute as they may seem, their intimate presence sucks you into their microscopic world of tactility and a parallel life – a channel to transcendence?

In 2008, Mulyana created his alter-ego, the Mogus (Monster), alongside the Gurita (octopus) and Sigarantang (Mulyana’s clan name). The Mogus is made of knitted pompoms from unused bulky yarn, adapted from images of marine life with its beautiful diversity and mystery.“In God’s eyes, our being in this life is to eventually go to a beautiful place,” says Mulyana for whom art making is a privileged way of “showing gratitude to our Creator who gives him a sound mind and a healthy body to be part of life on earth”. Often, Mulyana speaks of his work with vigorous reference to spirituality and a sense of a higher being guiding his act of creation.