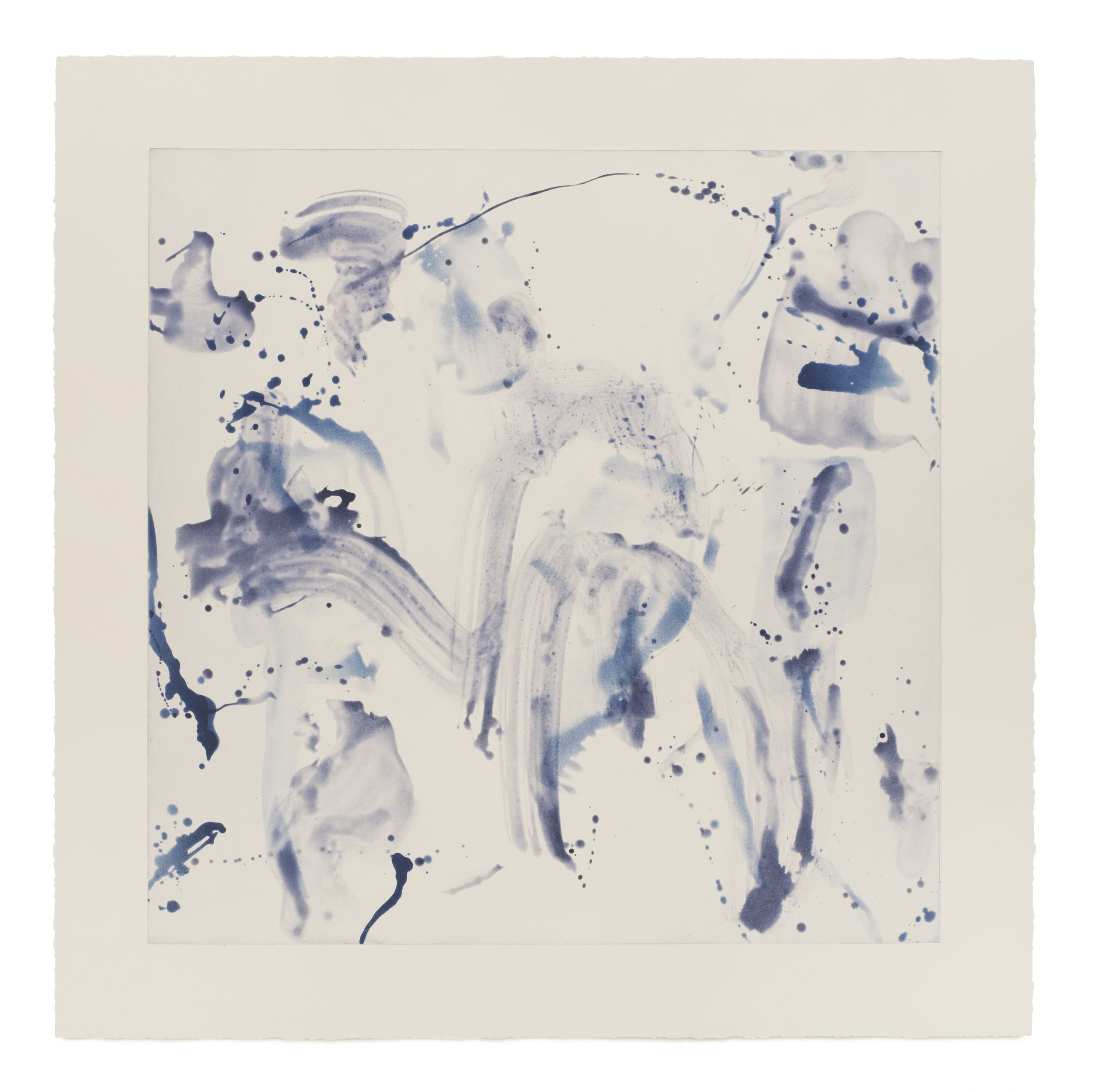 “I circled the copper plate constantly, approaching it while making decisions. With a huge canvas you have so much authority. You turn the canvas to suit you. The copper plate is so large and when using dangerous material you really have to adapt completely. You have to work around the plate, literally circumnavigate it clock-wise and anti-clockwise, many, many times. I had to do this publicly (in the presence of assistants) as well. It’s not something I am used to at all because painting is an absolutely private process for me. I had to think “transparently”. – Suzann Victor

These paintings with acid were pulled from three copper plates that were the largest (48” x 48”) STPI has ever used for the spit-bite technique. With large customized brushes, Victor painted copper-etching acid directly onto the plate; her expressive strokes and gestures of mark-making recorded all at once. The prints were then re-inked and layered to form varied combinations of swift and fluid washes. Unlike painting on canvas that remains upright most of the time, the copper plates were required to be raised above the floor and the artist had to don protective gear and breathing apparatus prior to painting.

“What is interesting is the lack of ‘orientation’,” says Susie Lingham. “Victor envisioned that each square plate, one metre by one metre in dimension, could be seen from four different directions, and she intended for the three plates to be printed in two or three layers, which allowed for quite a range of print permutations. As Victor states, “there is no wrong side”. This series appears to defy the ‘control’ of printmaking processes, reflecting the more organic painting process where the prints are fresh, spontaneous, and complete with expressive drip and inadvertent splash.”

Suzann Victor is a Singapore-born, Sydney-based contemporary artist best known for prospecting the contours of human sensorial experience, perception and phenomena by mining materials from the body, the natural elements of light, water and sound to the science of physics in conjunction with engineered components and the readymade. Through intimate performances or large-scale installations, public artworks or endeavours of collective labour, Victor interrogates the significance of sites, spaces and architecture to transform them into immersive environments that draw awareness to the viewer’s own body as an investigative tool for apprehending the world at large.

A leading figure in Singapore’s contemporary-art scene, she was the first female artist to represent Singapore at the Venice Biennale and the concept developer of 5th Passage, the country’s first artist-run feminist art space that generated new art audiences for contemporary art in the early 90’s. Victor’s socio-political works are recognised for their critical engagement with the cultural aftermath of postcolonialism in Southeast Asia, female disembodiment and the inversion of the abject. On environmental concerns, Victor’s interest in manifesting “objectless art” saw her customisation of green technology to cause double rainbow arcs to appear within the museum’s rotunda at the 4th Singapore Biennale.