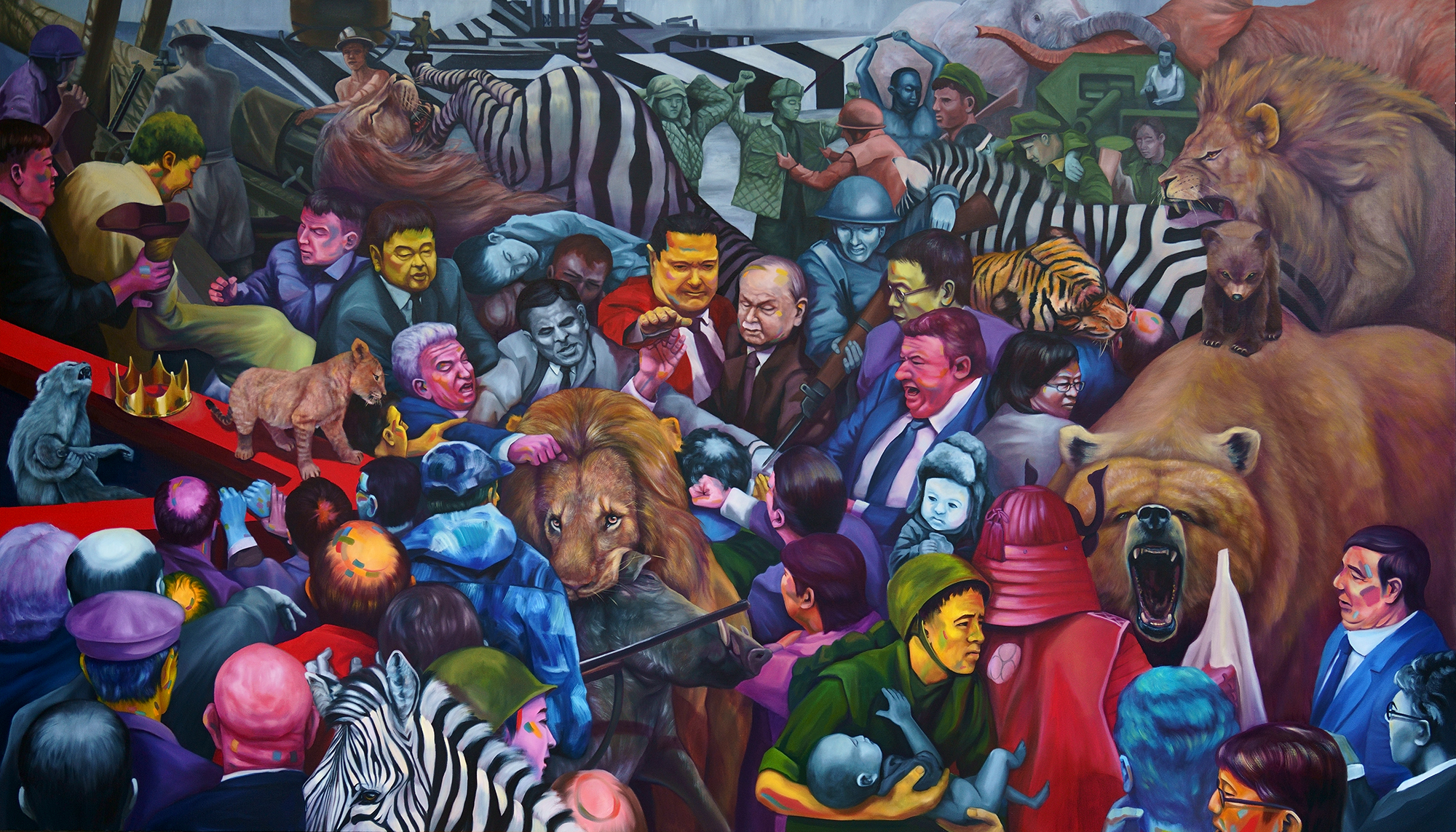 In “The Grand History”, David paints a great battlefield heavily juxtaposed with the orgy of humans and animals that covers the whole canvas. It is visually intensive that the work’s composition gives the sense of the characters overflowing out of the canvas, living out their reality. Politicians and soldiers are wrestling at its grandeur and war machines signifying the current geopolitics order being played out. Lions and zebras, preys and predators, are fighting for survival and protection, completing the circle of life. Nevertheless, in this chaotic scene of history, the systematic and rhythmic positioning of each player, humans, and animals conjured with David’s clever use of colours, showed his supreme control and mastery visionary at work. This work reflects on this book, The March of Folly by Barbara W. Tuchman, published in 1984 about one of the most compelling paradoxes of history: the pursuit by governments of policies contrary to their interests, from the Trojan Horse to Protestant reformation. Like many human psychological paradoxes, the freedom to self-destruct is probably one of the oddest characteristics we possess. Look around, and one will see this play out worldwide: the right to refuse aid, the right to deny logic, and the right to destroy peace. Although one might argue that we are living through the most prosperous time, with advances in technology, medicine, and science, we seem to have left part of our humanity behind. Even if some of these actions seemed counterintuitive actions that do not make sense, this is not a new phenomenon; we have been here before. The truth is that history is constantly repeating, be it the tragedies from conflicts or the triumphs from inventions; our unpredictable nature is ironically very predictable if there is anything that we have learned from the past.

DAVID CHAN (b. 1979, Singapore) paints in a realistic style, yet hints of the surrealistic connotation come into play in his subjects such as animals, humans/human hybrids against his vivid or monolithic background. At first glance, the audacious works seem comical or bewildering. However, upon closer observation, the initial impression gives way to the artist’s reality and his take on social issues such as popular culture and genetic engineering, and human behaviour in our current times. In that, it is always not easy to unpack the story behind each of David’s works. It is like taking a lateral journey with David, the improbable storyteller himself.
One has to dip deep into David’s realm of reality and imagination to understand his visual language and its iconographical interpretations of the story to be able to fathom the realistic rendition of his work. In David’s early works, such as his “A Divine Comedy” and “Modern Beliefs” series, his works would be more fun, witty, and to some extent, whimsical. He used his in-depth knowledge of ethics of genetics to explore the anecdotes of human and societal relations, often humorous and comical, but with satire, serious undertone. David’s visuals took a darker tone in his series of works in “Hybrid Society”, exploring the hybridisation and oxymoron of humanity and society. David sought to rationalise the truth in the society of hybrids; the dichotomy of truths and lies, good and evil, strong and weak in humanity and societal relations, giving penetrating insights, often satirised and dramatic. David’s body of work is not just comprised of two-dimensional works; he is very skilled and commendable in the school of sculpture. His obsession with perfection and detail showed vividly in his majestic pair of deeply imaginative and visually impactful sculptures, “Chimerative and Centauree”. David’s hybrid take of these mythological creatures embodied the theme and ideology with literary and biblical complexities altogether, showing how ancient masculinist and femininity theories can be discoursed and re-interpreted in today’s contemporary urban environment.
“The Grey Gap” is a collection of David’s random thoughts and ramblings. An exploration into the edges and gaps of his realization and fascinations, a look at the seeds that have unravelled, and his search for rationality and equilibrium in his works in comprehending human existence and nature. David is a true storyteller, sitting on the fence, watching the world.