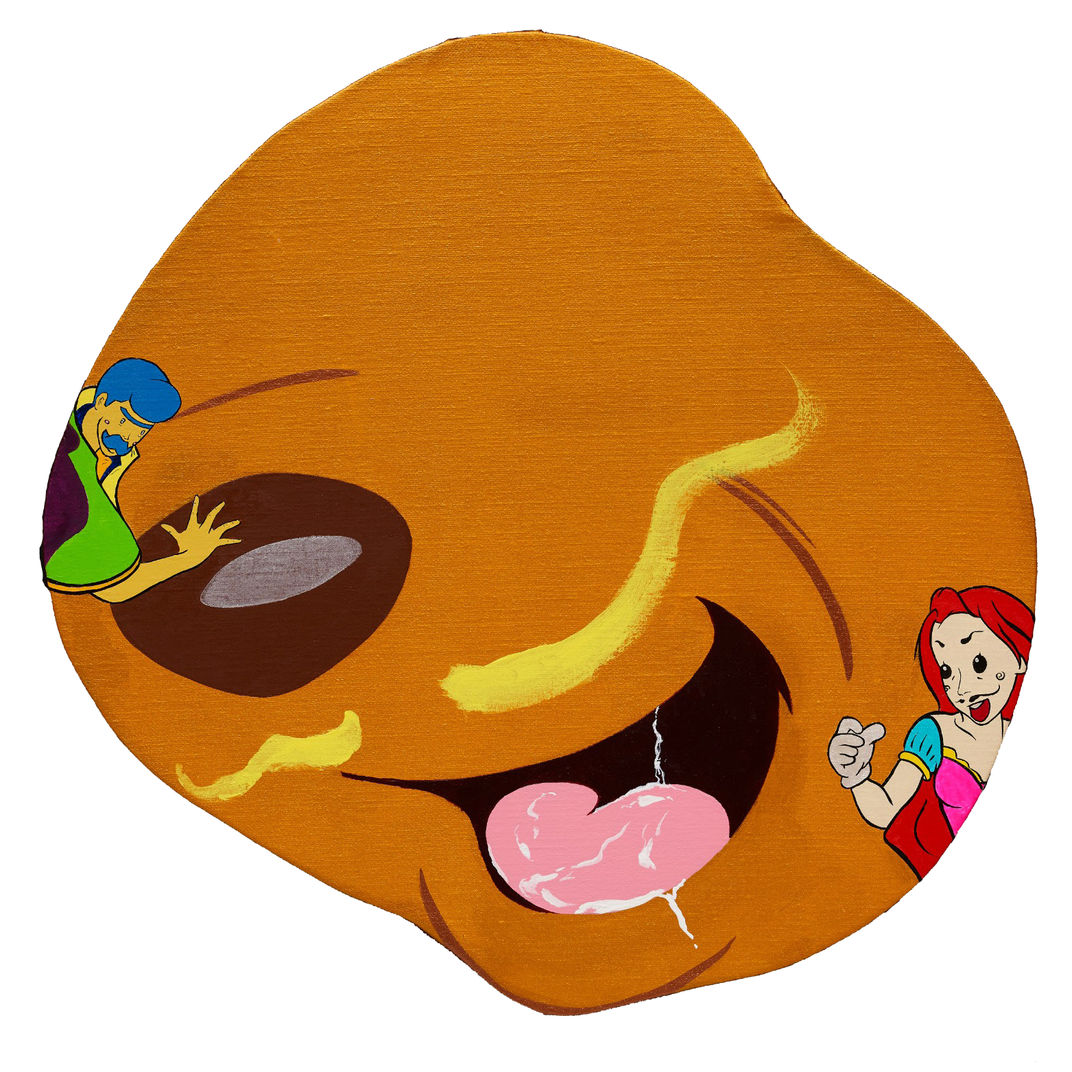 Look at me, Reaching out

This painting was produced in 2014, when Wong was a relatively young artist struggling to articulate a personal creative vision and to negotiate his place in the broad, complex world of contemporary art. Viewed collectively, these works offer an glimpse of the artist’s mental universe at that stage in his life; an autobiographical tale told in a series of flatly delineated, vibrantly coloured images that evoke the visual language of graphic design or comic books. Other works in the series serve as deeply personal revelations of Wong’s life as a young artist: his body image issues and sexual preoccupations, intellectual interests and Singaporean identity.

Wong’s paintings may bring to mind various postmodernist art movements, in particular, pop art. Influenced by popular culture and mass consumerism, pop artists set out to blur the distinctions between high art and the broader realm of contemporary visual culture. Wong’s art likewise exploits that uneasy intersection between critical commentary and consumerist-driven appeal. Highlights of the exhibition include works that mimic the style of major stars and movements of contemporary art: the dots of Yayoi Kusama, monochromatic abstraction, graffiti. These works do not act just as an homage to icons in art history, but also are indirect statements on the nature of the art world, where the line between homage and plagiarism–appropriation and copyright infringement–grows ever more porous, and what was once viewed as the signifier of artistic inspiration can quickly be flattened out into visual cliché and caricature.

to performance. He began his artistic career as a painter, but his more recent creative trajectory is centered on multi-sensorial modalities in art, especially the olfactory, auditory and gustatory. His works tend toward a strongly autobiographical bent, dealing with issues and shifts in his personal life, which are often related through narratives involving Lilou and Oomoo. The latter are two manga-like characters that serve as the artist’s alter egos, and were borne of his life-long fascination with the imagery and pictorial language of the wider visual world, from film to comics to design. Of late, his works have also addressed themes concerning speculative or vernacular histories pertinent to the folkloric traditions of the Sinosphere.

Wong was trained in printmaking at LASALLE College of the Arts, and graduated with a B.A. in 2009. He also served as an adjunct lecturer at the institution from 2014 to 2018. His first solo exhibition, “Now You See” (2009), which took place while he was still a student, was the result of a month-long residency organized in collaboration with the Marina Mandarin Hotel. His most recent solo outing, “Thousand Knives” (2015), was held at Galerie Michael Janssen, Singapore. Selected group exhibitions include those at STPI, Singapore (2007); National University of Singapore Museum (2009); ShanghArt, Singapore (2013); Yavuz Gallery, Singapore (2013); Yeo Workshop, Singapore (2014); Wei-Ling Gallery, Penang, Malaysia (2015); Asia Culture Center, Gwangju, Republic of Korea (2015); Rarytas Art Foundation, Poznan, Poland (2016); 2 Cavan Road, Singapore (2020). Other projects include Fetter Field: Singapore Performance Art Event (2007); DRIVE, Gillman Barracks (2014); Singapore Art Museum