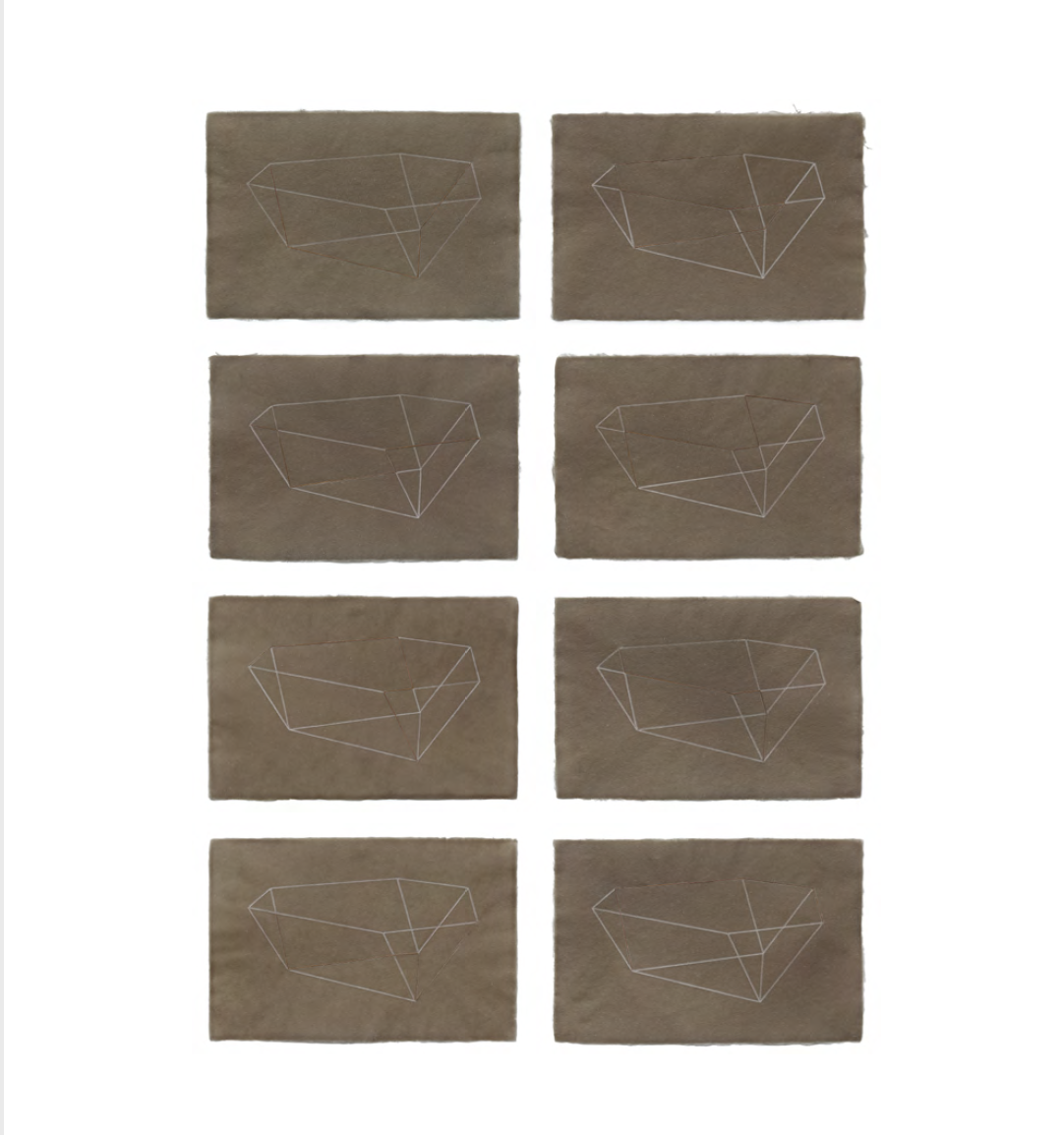 Prabhavathi Meppayil continues to merge artisanal traditions with abstraction, opening up questions and engagements with form and seriality, while deliberately reframing these strategies in order to position herself outside of the Western contemporary art canon.

Creating six works while at STPI, with each one comprising eight individual prints, every artwork recreates a single geometric shape again and again via the embossing technique. These shapes borrow their form from found tools and moulds that were previously used to fashion jewellery but have now become obsolete in contemporary times. Within each print, the artist carefully embeds a stretched copper wire onto selected areas, with each copper wire occupying different positions across the eight prints. These copper wires are reminiscent of their usage in past works where the exposure of the wire to the air enacts an oxidation process, thus holding open the space for chance and transformation. They further activate spaces of liminality where the wires may appear or melt into the embossing depending on which angle one views it on, further enhanced by their dissimilar placements across all eight prints.

While employing a noticeably different methodology in terms of process and material, where the artist trades her intensive markmaking and thick canvases for the embossing process and delicate STPI handmade paper, the cu/lp/ series (2021) nevertheless recalls her conceptual interrogations of shape and form, as well eliciting the tensions and ambiguities of dominant art trajectories in relation to the socio-cultural specificities of her own background.

Prabhavathi Meppayil (b. 1965, India) draws from her heritage as the daughter of a goldsmith to sensitively abstract from this tradition, and to engage with the global legacies of Minimalism and Postminimalism. Directly employing tools of the trade—primarily thinnam, a traditional jewellery tool used to incise ornamental patterns on bangles—Meppayil’s mark-making is characterised by a sense of delicate yet laboriously repeated interruption atop a painting surface, predominantly primed with multiple layers of gesso. The renewed use of particular materials invites notions of tradition, craft and modernist abstraction to converge on the same field of play, moving away from post-war reductionist tendencies to secure a strong engagement with historical and geopolitical specificity.

Arising somewhere between the precision of artisanal execution and the unpredictability of material condition, Meppayil’s gestural impressions become palpable traces that bear the mark of a temporal dimension. Particularly in works that involve copper wires which undergo her processes of tempering and oxidisation, her compositions capture nuanced transformations and variations over time. Integral to Meppayil’s practice is a concern for the sonic quality inherent in goldsmithing. Apart from the visual repetition in basic geometric forms, the percussive element in the tapping of tools invites another dimensional layer to her work. The engagement with form and process thus invokes the bodily, and unveils the passage of time and its effect on tradition and place. In 2021, the artist completed a series of print works with STPI.